Nutrition plays a huge role in fighting cancer and in reducing the chances of it recurring, and I’m taking steps to dramatically change the way I eat. Some changes are pretty big and a bit challenging. Others are small and easy, like drinking warm lemon water every morning, before eating or drinking anything else.

Here are a few interesting articles about the health benefits of lemon water: 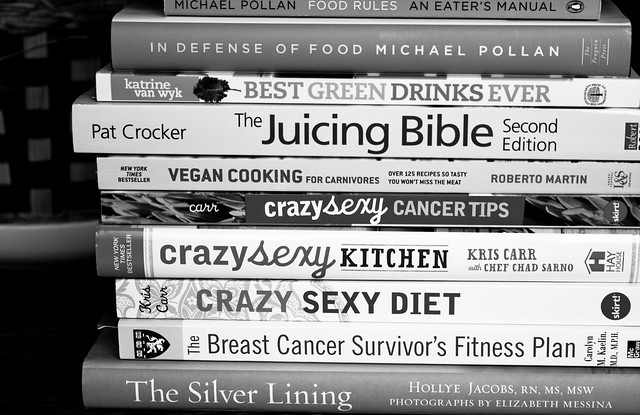 Even before my diagnosis, I had been planning to cut back on eating meat. Not that I eat that much, but I just feel better when it plays a smaller role in my diet. The same goes for most wheat products.

I had already bought Crazy Sexy Diet by Kris Carr before April 4. Little did I know that she’d become one of my gurus within such a short time.

I am generally pretty slow at making decisions. I like to take my time pondering, researching, and over-analyzing. Even about some pretty simple things. (Gus often points out when I’m over-thinking things, and he’s usually right.)

And I second-guess myself a lot. I’m that person who takes a ridiculous amount of time looking at a menu, and then when my order arrives, I often wish I had chosen the other dish. Although, now that I think about it, I do that less frequently. The older I get, the more sure I am about what I want. Especially in restaurants.

I also have really good instincts. You would think that should make decision making easier, right? Not always. It’s some sort of curse.

Since being diagnosed with cancer, I’ve been trying to stay more in tune with my instincts. I knew from the start that I would have a lot of decisions to make, and I hoped that my instincts would help me successfully navigate this journey with as little over-analyzing and second-guessing as possible. And I came up with a technique that helps. If I start to feel overwhelmed about any particular decision, I stop thinking about it for a day or so. And usually the next morning, or the morning after that, I wake up and the answer is usually there.

The first decisions I faced after my diagnosis were pretty big ones and were presented to me at my surgical consult with Dr. Fox on April 9. (Have I told you how much I love my surgeon? I think of her as Fantastic Dr. Fox.)

That was an easy one for me. Mastectomy. I’m a worrier, and I wanted to reduce the chance of recurrence as much as possible.

Another easy one. Double—for two reasons. First, again, to reduce the chance of recurrence. Second, I want symmetry. I despise wearing bras and don’t usually wear them at home, and I just did not like the idea of how it might feel to be braless with only one breast.

This one was tougher. Before the initial consultation with Dr. Fletcher, my plastic surgeon, I was positive I’d go for reconstruction. It seemed like a no-brainer. But the more I learned about the different types of reconstruction, the more overwhelmed I got. Did you know that the lifespan of saline and silicone implants is only, like, ten to twelve years? Or that in addition to implants, there is the option of autologous reconstruction (tissue transplant)—also called flaps? Whoa.

I ruled out a flap reconstruction right away, simply because I didn’t want to deal with that type of recovery in addition to fighting cancer. I figured that I would have enough on my plate.

It was also tough to see all of the photos of other patients, especially those who had had nipple reconstruction and areola tattoos. Of course, you don’t have to choose either of these options, but looking at the photos was a little overwhelming. The nipple reconstructions were well done, but the tattoos all looked the same—the same shape and color. I decided that if I went that route, I’d find my own tattoo artist for that particular assignment.

And then it hit me. Tattoos. Not just simple areola tattoos, but full-blown warrior/survivor chest art. I mentioned the idea to Dr. Fletcher, and he told me that several of his patients have gotten some pretty amazing tattoos.

Now we were talking.

I went home and did a little research—mostly about post-mastectomy tattoos, with and without reconstruction. I also read quite a bit about what led a lot of women to choose whether or not to go with reconstruction. One of the most helpful resources was a support site for women who had chosen to forgo reconstruction. For the most part, they were all happy with their decisions. Except for one thing. When they wanted to wear t-shirts, they often chose to wear a bra with prosthetics to look and feel more natural, and the biggest complaint was how hot they would get wearing them.

That would be a deal breaker. If there’s one thing I hate, it’s being overheated. I started picturing myself at weekend baseball tournaments in June and July, wearing t-shirts and prosthetics. Nope. I couldn’t do it. No heat-inducing prosthetics for me.

So I was strongly leaning toward reconstruction with implants. By the next day, I was positive about my decision and called to schedule my surgery.

My mastectomy was on Wednesday, April 23. I opted for immediate reconstruction with expanders, which will be gradually filled with saline over time. Sometime in the next few months, I’ll have those replaced with saline implants.

In the next week or so, I’ll post about recovering from surgery, my pathology, meeting with my oncologist, and the even bigger decisions I have ahead of me.

In the meantime, I’ll be reading about decision fatigue.

Here it is, May 4. Exactly one month from my breast cancer diagnosis. It almost seems as if time stood still starting that day, and yet so much has happened since then.

It all began with a routine mammogram on March 24, followed by a call a few days later from the clinic letting me know that more images were needed.

I had been called back before after previous mammograms, but this time felt different. I had an uneasy feeling. For one thing, the follow-up mammogram was scheduled to take place at the Regions Breast Health Center, and the scheduler told me that I would meet with the radiologist right after the mammogram. (Crap.) For another, when I had to cancel because of a serious conflict at work, they called me within an hour to reschedule.

Those are two big, waving red flags, so immediately after I hung up after making an April 3 appointment, I looked on my HealthPartners app and opened the initial lab results. “Two partially obscured masses …”

That reaction was nothing compared to what I was thinking, and saying, on Thursday, April 3, starting at around 8:30 and throughout the rest of the day. That’s when I really started getting in touch with my inner Detective Debra “Fucking” Morgan.

That morning, I dropped Gus at school for his early morning workout and headed downtown for my 7:40 appointment. As I turned onto Warner Road and started down the hill through the road construction, I thought, “This is the last of ‘normal’. In an hour or so, I’ll be on the other side of that.”

A couple of full-field digital mammograms and a long ultrasound later, I was told that there were two lumps in my right breast—both appearing to be less than 2 cm in size. And it’s very likely that they’re cancer.

I had officially exited normal.

The next 15 minutes were a whirlwind of emotions. I’m not going to go into those details here, though, because (a) I don’t normally even acknowledge my emotions, and (2) I’m not about to actually share them. At least not yet.

But I do want to say that the staff was amazing and incredibly kind, and I made a point to remember their names—the mammogram and ultrasound nurses and the diagnostic radiologist—mentally making a list of them as team members. I’ll need a team for this, right?

The biopsies were performed immediately. At the end, the radiologist injected a marker into each lump so the surgeon would be able to locate them easily.

“Those are really tracking devices, aren’t they?”

“Everybody asks that. And yes, they are.”

Well, this guy is definitely on the team.

From there, I met with a nurse practitioner, who told me she’d call after 3:00 the next day with the official biopsy results.

By 9:30, I was walking back out into the world and straight into a disorienting fog.

As I left the parking ramp, I turned right even though I knew I should have turned left. It seemed like I didn’t really know where I wanted to go or what I wanted to do. My mind was jumping way ahead into the future. I immediately knew that wasn’t going to work. I needed to focus on the now and stay there as much as possible. I took a few breaths, pulled myself back into the present, made a u-turn, and got myself on the correct route home.

The call came at 4:20 on April 4. Definitely cancer. Infiltrating ductal carcinoma. Each lump appearing to be smaller than 2 cm and both low grade.

It was time to forge a new normal. 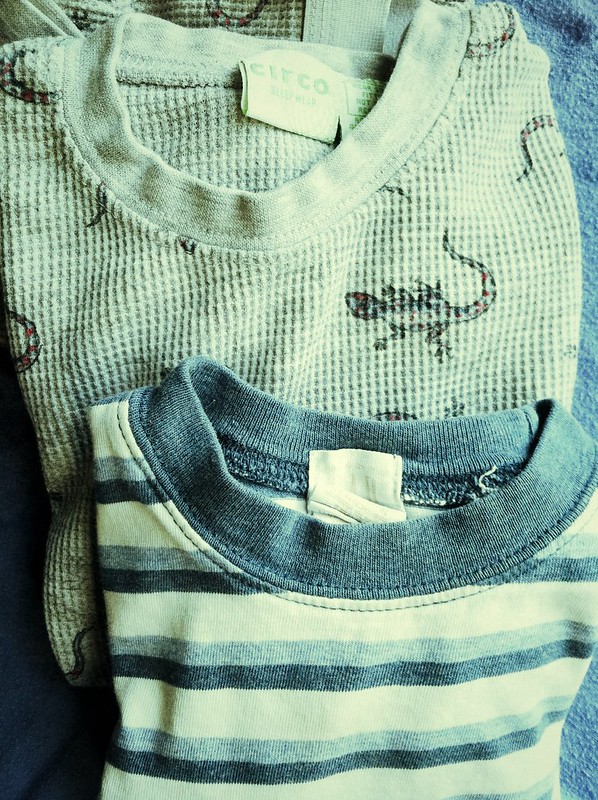 I spent the afternoon photographing the boys’ baby clothes. As much as I love taking their old things out every now and again to reminisce, they’d be of more use to a mom who needs them for her baby right now.

I’ll be keeping a few special things, like the the striped t-shirt that I dressed Max in so often as a toddler and Gus’s treasured lizard pajamas (he’d wear them every chance he got … day or night).